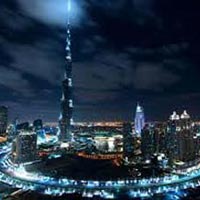 Book our flawless and best-priced Airport Pick Up services to eliminate all
expenses and tensions of finding a cab as you touch down the Dubai
International Airport. This ensures a perfect start of your Dubai vacation or
business trip. Whether it’s for individuals, groups or families, we’ve a
spectrum of vehicles to cater to all your travel requirements. All you need to
do is to provide us your details including flight landing time and hotel or
accommodation address at the time of booking, which will be confirmed
instantly. You can be now assured that as soon as you clear the immigration
formalities and come out of the airport, a friendly, neatly dressed driver will
greet you at the arrival area. Settle into our clean, air-conditioned vehicle
and enjoy a smooth and unworried transfer to your hotel, private residence
or preferred location in Dubai.
Meals : DINNER
Day 2: 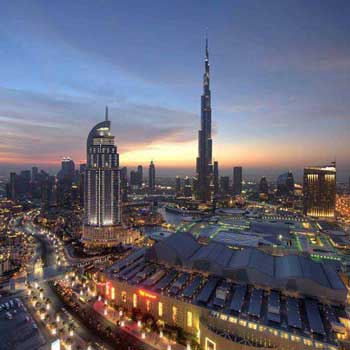 1. Our 4 hour Dubai city tour would take you to the most prominent places in
Dubai. You also get to see two different sides of Dubai, the historical one
and the modern one. Beginning with the Dubai Museum, located in the Al
Fahidi Fort (built in the 18th century), you get to see Dubai before it
discovered oil and became the power city it is today. This is followed by a
drive along the Dubai Creek, which is a historical area and still holds
remnants of the past. You get to enjoy Arabic architecture with a visit to
Jumeirah Mosque, which is the only mosque in Dubai open to non-Muslims.
So, make the most of it. While the historical part of the city is quite
interesting, your Dubai city tour would not be complete if you do not see its
modern side. The tour takes you Hotel Burj Al Arab (which is designed in the
shape of a sail), the Palm Islands (largest artificial island in the world), Hotel
Atlantis the Palm (the crowning glory of palm Jumeirah), Jumeirah Beach and
Burj Khalifa (the tallest building in the world). The tour also includes a drive
along the Shiekh Zayed Road so that you can take a look at the skyscrapers
and magnificent buildings on both sides of the road. This tour package by us
has been designed to cover the most important places in the city of Dubai.
This tour package is perfect for those who want to view the entire city of
Dubai in a short period of time.

2> Dubai's Burj Khalifa, the tallest of all the buildings in the world, stands tall
and proud amongst the other skyscrapers of the city. One of the major
landmarks of the city, the interiors of the Burj is as majestic as the steely
exterior. Take a look at the marvellous building from the inside by joining the
Dubai Burj Khalifa Tour with us. During the tour, you are shown a multimedia
presentation about the history of Dubai as well as the story of the
construction of the building. Once you have gathered information about this
tall structure, you are taken to the 125th observatory deck (At the Top) on
the fastest elevator. Here you get a chance to have a 360-degree panoramic
view of the entire city of Dubai. This is one tour that you should definitely not
miss when in Dubai. So book your tickets today for a tour of the Burj Khalifa.
Meals : BREAKFAST AND DINNER
Day 3: 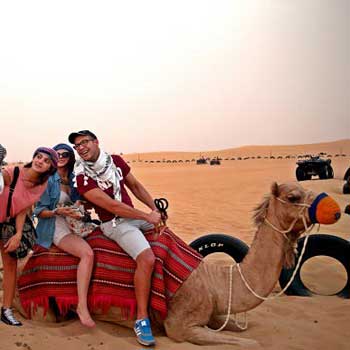 If you want to experience the life in Dubai or UAE before it became the city it
is today, a desert safari trip is a must. Our desert safari trip includes
spending a few hours time in a Bedouin style tent, right in the middle of the
desert. The tour begins with our vehicle picking you up from your home or
hotel and driving you down to the outskirts of the desert. Here starts your
exciting desert journey in a 4 X 4 Land Cruiser that would take you on a
dune bashing ride. Experience your adrenaline going high up while the sand
sweeps around your vehicle and you cascade on the steep sand
dunes. Once you arrive at the desert campsite, you can enjoy your time by
riding a camel, smoking a flavoured shisha, drinking the traditional Arabic
coffee, enjoying the captivating belly dance and Tanura dance. Do not miss
the chance to take some breathtaking pictures of the desert in your camera,
especially during sunset. The colours of the setting sun on the sands would
leave you mesmerized. Apart from this, you can try out the traditional
costumes, get a henna tattoo and enjoy a delicious buffet dinner. After the
dinner, you would be dropped back to your place of stay.
Meals : BREAK FAST AND DINNER
Day 4: 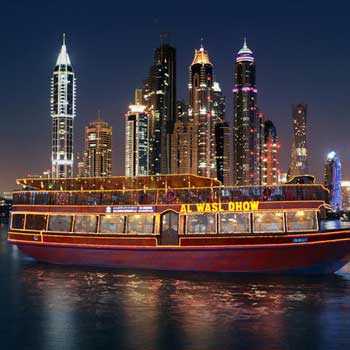 Dubai Creek is an integral part of the city's history. It divides the city into two
sections, Bur Dubai and Deira. Both the sides of the Dubai Creek boasts of
some of the best exquisite buildings of the city. Therefore, a trip to the Creek
is a must. However, rather than walking on the coast, go on a dhow cruise to
turn your sightseeing into a unique experience.The dhow is a traditional
Bedouin boat that was used for trade and transportation. Today, these
dhows have been converted into restaurants that have a lower (airconditioned)
and upper (open-air) decks. You are offered a welcome drink
on arrival and are also served delicious barbecued dishes once the dhow
sets on sail.While you enjoy your drink and starters, you can take a look at
the prestigious buildings and structures of Dubai, glittering in the night lights.
You can also enjoy a delicious buffet spread with a variety of vegetarian and
non-vegetarian dishes. Dhow cruises also have entertainment options which
include live music performances, Tanura dancing, etc.If this unique way of
cruising impresses you, make a reservation on our exclusive dhow cruise
for dinner
Meals : BREAK FAST AND DINNER
Day 5: 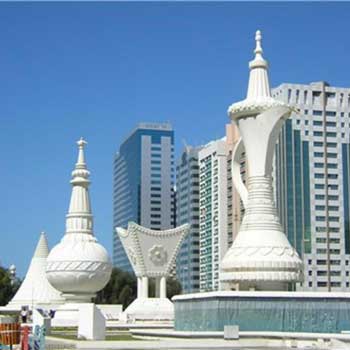 A visit to Abu Dhabi is a must to get a deep understanding of the culture and
heritage of the Arabs. Our Abu Dhabi city tour would take you to the best
tourist places of the Emirate city. Our local tourist guide will help you best
explore the historical and architectural brilliance of the city's attractions.We'll
pick you up from your residence or hotel in Dubai and take you to Abu
Dhabi. Our tour begins with a visit to Sheikh Zayed Mosque, also known as
Grand Mosque. This is followed by places like Abu Dhabi Corniche, Emirates
Palace, Abu Dhabi Culture and Heritage Centre etc. Visit the famous WTC
Mall and indulge in irresistible luxuries. This tour also takes you to the
famous Yas Island along with the world's biggest one-of-a-kind theme park -
the Ferrari World. The entire tour takes about nine hours in absolute
comfort. At the end of the tour, we drop you back to your residence in Dubai
or Sharjah. Go on this tour to enjoy the marvellous sights of Abu
Dhabi. Individuals can also book this tour, as per its availability and in line
with group departure timing. Based on your request, we can arrange a pick
up from other emirates for a small extra surcharge.
Meals : BREAKFAST AND DINNER
Day 6: 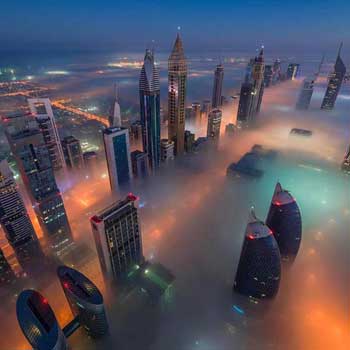 End your Dubai visit in the most worry-free way! Irrespective of you’re
visiting the emirate individually, with your family or kids, or in a group, all
your unique travel requirements will be immaculately taken care of with us
airport drop off service. Our well-trained and polite team guarantees reliable
departure transfer that will get you from your Dubai hotel or accommodation
to Dubai International Airport promptly, without any tension. Major plus is that
each of our experienced drivers has exceptional knowledge of almost all
Dubai routes and locations, so you needn’t have to worry about missing the
flight due to traffic block or other delays along the way. In order to ensure a
smooth service, we advise you to give us precise information pertaining to
your flight departure time, Dubai pick up location address and contact
details while making the reservation. Your airport drop off service will be
confirmed at the earliest. On the day of departure, your driver will meet you
at the hotel’s lobby or designated Dubai spot to comfortably transport you to
the airport for your onward journey.
Meals : BREAKFAST